Born in 1998 and of Nigerian-Scottish descent, Aaron Akugbo hails from Edinburgh and is poised as a future leading exponent of his instrument.

He brings a wide-ranging musical taste to his artistry and despite being classically trained, cites Louis Armstrong as his biggest musical inspiration. He is a charismatic performer with an abundance of natural humour which translates into an effortless engagement with people and audiences.

A graduate of the Royal Academy of Music and an ex-principal of the National Youth Orchestra of Great Britain, Aaron can often be seen freelancing in the principal chairs of some of the most prestigious orchestras in the UK including the Philharmonia, BBC Philharmonic, BBC Symphony and Royal Philharmonic Orchestras.

In 2020, as part of the Southbank Centre’s ‘Behind Closed Doors’ concerts series, Aaron made his London debut at the Royal Festival Hall playing the Haydn Trumpet Concerto with Chineke!, Europe’s first Black and Minority Ethnic orchestra. His performance received glowing reviews, with the Arts Desk describing him as “a refined soloist… His sound was sweet, often lyrical… with perfect clarity and intonation”.

Within the orchestra, Aaron has played in the UK’s top concert halls including Chineke’s BBC Proms debut. Aaron made his Wigmore debut playing Saint-Saëns Septet Op. 65 for Trumpet, Piano and Strings with members of Chineke!, as well as participating in the orchestra’s tour of Europe playing in halls such as the Royal Concertgebouw Amsterdam and Kölner Philharmonie.

In early 2019, Aaron was a finalist in the “Girolamo Fantini” International Trumpet Competition whilst also being awarded the special prize for best performance of Vulcano Club by Piergiorgio Ratti. Aaron was subsequently invited by competition panellist and trumpet soloist, Tine Thing Helseth, to the Risør Kammermusikfest in Norway where he received masterclasses from Tine herself whilst also performing as a soloist.

Besides his solo and orchestral performances, Aaron is also a member of the inaugural Philip Jones Brass Ensemble Award winning group, Connaught Brass. As a result of the competition, the quintet will give their debut performances at London’s Wigmore Hall and at the Lucerne Festival next season.

In 2020 the group gave several performances at the 2020 Birmingham Brass Festival including a recital and featuring as one of three brass quintets in a festival commission alongside Onyx Brass and a student quintet of the Royal Birmingham Conservatoire.

Aaron has received both lessons and attended masterclass from many of the top trumpet players including Urban Agnas, Reinhold Friedrich, Jeroen Berwaerts, Gabor Tarkovi, Guillaume Jehl and Eric Aubier.

He plays on a combination of Vincent Bach Stradivarius and Scherzer instruments, his C trumpet purchase was made possible by a Royal Philharmonic Society Instrument Purchase Grant he was awarded in 2017. 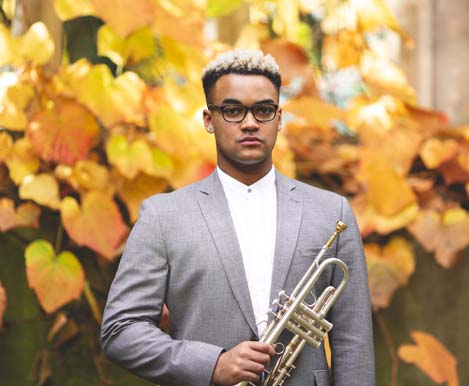 “a refined soloist… His sound was sweet, often lyrical… with perfect clarity and intonation”.