Matthew is renowned for his ‘freewheeling exuberance & blistering virtuosity’ (BBC Music Magazine). He appears globally as solo cellist, baritone, director and educator. His guiding lights are upliftment and connection, fearlessness and joy. These principles propel him into the classical canon, through cross-cultural collaboration and across art forms.

Matthew studied cello with Boris Pergamenschikow in Cologne, voice with Ulla Blom in Stockholm and English at Trinity College, Cambridge. He was taken to Jacqueline du Pré when he was 12, Galina Vishnewskaya when he was 18 and studied chamber music with the Amadeus Quartet. He has performed worldwide from Glastonbury to Glyndebourne, Sydney Opera House to Wigmore Hall, Royal Festival Hall to the Knitting Factory.

In opera, he has performed principal roles for the Royal Opera House, Opera North, Almeida Opera and Mahogany Opera Group, amongst many others.

In theatre, he has performed principal roles at the Young Vic and National Theatre Studio, collaborated with Kneehigh, Complicité and, most recently, with legendary illustrator and film-maker, Dave McKean.

He is an award-winning recording artist and has recorded for Sony, EMI, Decca, Naxos, Somm, NMC, Avie and Whirlwind.

As a director (music, theatre and opera), he has written, conceived and directed shows for Opera North, BBC, Breakthru Films, Yorkshire Sculpture Park and West Green Opera. His own music and theatre works have toured to major festivals in Europe, India, China and the US, including Glastonbury, Latitude, Wilderness, Mumbai LiveLit, Philadelphia Live Arts and NCPA, Beijing. In addition, he has given over sixty world premieres by composers from all walks of music – including the title role in Sir John Tavener’s The Fool and Errollyn Wallen’s Cello Concerto – at festivals from Sydney to Toronto, Sao Paulo to Delhi.

He has worked with an extraordinary spectrum of major artists, including:

Matthew is artist-in-association with the English Symphony Orchestra and Northern Chamber Orchestra and is a visiting professor at the Royal Birmingham Conservatoire. His devotion to unlocking and unleashing creativity, clarity and authenticity has taken him to schools, conservatoires and universities around the world.

He is thrilled to play on a copy of the ex-Pergamenschikow Montagnana by Robin Aitchison. 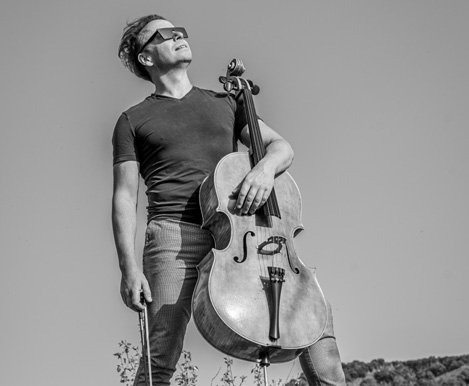 'Virtuoso of the arts'