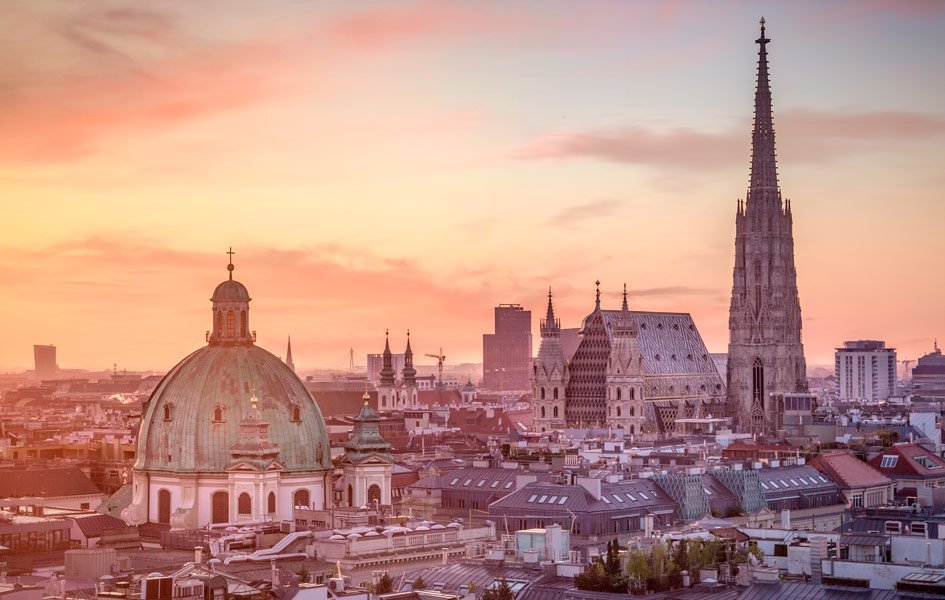 We’re delighted to be joined by Aaron Akugbo who will  be performing Haydn’s Trumpet Concerto in E flat Major, with Michael Collins conducting.

Vienna is synonymous with a classical music scene of astonishing vitality; an era of unparalleled pre-eminence that saw composers such as Mozart, Haydn and Schubert drawn to the city at the height of their creative powers.

An der schönen, blauen Donau, in its first incarnation as a choral work included the following text: ‘Mermaids whisper amid the dancing waves, a boat with lovers travels along, and unity for Vienna is assured by its presence.’ The shimmering violins and haunting horn calls of Johann Strauss II’s viral waltz represents one of the most magical openings of any musical composition.

The miraculous Adagio which sits at the heart of Schubert’s string quintet achieves an aura of awe-inspiring contemplation – a meditation beyond words. Suspended chords are punctuated by exquisite fragments of dialogue between violin and cello leading to a tempestuous and unsettled middle section.

Haydn’s Trumpet Concerto in E-flat Major was written for Anton Weidinger, principal of the Imperial Court Orchestra in Vienna. Weidinger’s innovative keyed trumpet remained popular until the middle of the 19th century by which time the valve trumpet was in more common use.

Arnold Schoenberg’s Notturno for solo Violin, Harp and Strings was composed three years before his string sextet Verklärte Nacht and is more akin to the late romantic style of that piece than his later twelve-tone compositions.

Mozart’s ability to speak with a universal voice about the human condition is never more apparent than in his final symphony. It is possessed of an extraordinarily uplifting quality, a joyous idealism that seems to encapsulate the triumph of the human spirit over adversity.

Why not pre-order your programme ahead of the concert. Tickets will be available mid-July,

Pre-order your programme ahead of your concert.