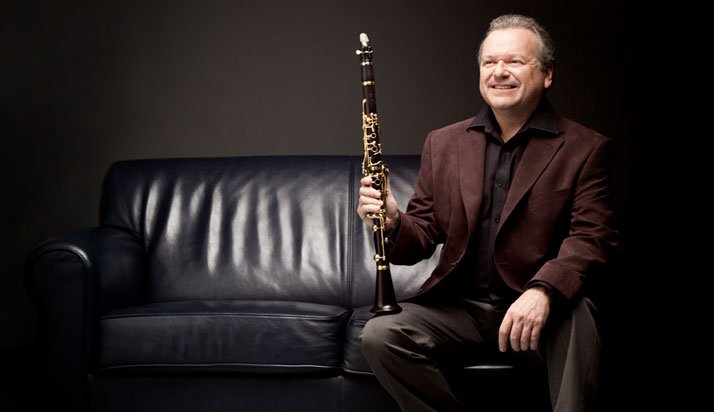 Michael Collins is one of the most complete musicians of his generation. With a continuing, distinguished career as a soloist, he has in recent years also become highly regarded as a conductor. Recent guest conducting and play-directing highlights have included engagements with the Melbourne Symphony Orchestra, BBC Symphony Orchestra and the Zurich Chamber Orchestra. From 2010 – 2018 he was the Principal Conductor of the City of London Sinfonia.

“Throughout, Michael Collins is in his element, relishing every twist and turn of the music’s consistently imaginative invention”. Gramophone

Michael made his conducting debut with the English Chamber Orchestra and performed with the London Mozart Players. In July 2018 he performed at the BBC Young Musician 40th Anniversary BBC Prom. He also recently hosted a series of Michael Collins and Friends concerts at LSO St Luke’s, recorded for broadcast on BBC Radio 3, featuring the Heath Quartet, Leonard Elschenbroich, Lawrence Power and Michael McHale.

Michael Collins has been committed to expanding the repertoire of the clarinet for many years. He has given premieres of works such as John Adams’ Gnarly Buttons, Elliott Carter’s Clarinet Concerto – for which he won a Gramophone award for his recording on Deutsche Grammophon – and Brett Dean’s Ariel’s Music and Turnage’s Riffs and Refrains, which was commissioned by the Hallé Orchestra. Collins has gone on to perform Turnage’s work with the Residentie Orkest, Royal Flanders and Helsinki Philharmonics, as well as the London Philharmonic Orchestra. Collins has received the Royal Philharmonic Society’s Instrumentalist of the Year Award in 2007 in recognition of his pivotal role in premiering repertoire by some of today’s most highly regarded composers.

Artist in Residence at Wigmore Hall

In great demand as a chamber musician, Collins performs regularly with the Borodin, Heath and Belcea quartets, András Schiff, Martha Argerich, Stephen Hough, Mikhail Pletnev, Lars Vogt, Joshua Bell and Steven Isserlis. His ensemble, London Winds, celebrated its thirtieth anniversary in 2018 and the group maintains a busy diary with high calibre engagements such as the BBC Proms, Aldeburgh Festival, Edinburgh Festival, City of London Festival, Cheltenham International Festival and Bath Mozartfest. During the 2019-20 season, he was an Artist in Residence at the Wigmore Hall which included concerts with Stephen Hough, the Vienna Piano Trio, Leonard Elschenbroich, Michael McHale and the Borodin Quartet.

Michael Collins records for Chandos, and in his prolific recording career, he has covered an extraordinarily wide range of solo repertoire, which also includes releases on Deutsche Grammophon, Decca, EMI and Sony. He is one of the world’s most recorded clarinettists, having made no fewer than twenty discs for Chandos alone. His most recent disc, released May 2019, is of Concertante works by Richard Strauss, with Collins as conductor and soloist, the BBC Symphony Orchestra, Tasmin Little, Julie Price and Michael McHale. Other recent releases include a disc of Crusell Clarinet Concertos with the Swedish Chamber Orchestra, which was Gramophone Magazine’s ‘Recording of the Month’ in June 2018 and was nominated for BBC Music Magazine Award; a disc of British Clarinet Concertos with the BBC Symphony Orchestra which features Collins as soloist and conductor, and two discs with pianist Michael McHale: the first of Brahms and Reinicke Clarinet Sonatas and the second of Reger Clarinet Sonatas. In 2017 he was awarded a Grammy for his disc Shakespeare Songs with Ian Bostridge and Antonio Pappano (‘Best Classical Solo Vocal Album’).

In the Queen’s Birthday Honours of 2015, Michael Collins was awarded an MBE for his services to music. He plays on Yamaha clarinets.

This website uses cookies to improve your experience while you navigate through the website. Out of these, the cookies that are categorized as necessary are stored on your browser as they are essential for the working of basic functionalities of the website. We also use third-party cookies that help us analyze and understand how you use this website. These cookies will be stored in your browser only with your consent. You also have the option to opt-out of these cookies. But opting out of some of these cookies may affect your browsing experience.
Necessary Always Enabled

Performance cookies are used to understand and analyze the key performance indexes of the website which helps in delivering a better user experience for the visitors.

Analytical cookies are used to understand how visitors interact with the website. These cookies help provide information on metrics the number of visitors, bounce rate, traffic source, etc.

Advertisement cookies are used to provide visitors with relevant ads and marketing campaigns. These cookies track visitors across websites and collect information to provide customized ads.

Other uncategorized cookies are those that are being analyzed and have not been classified into a category as yet.